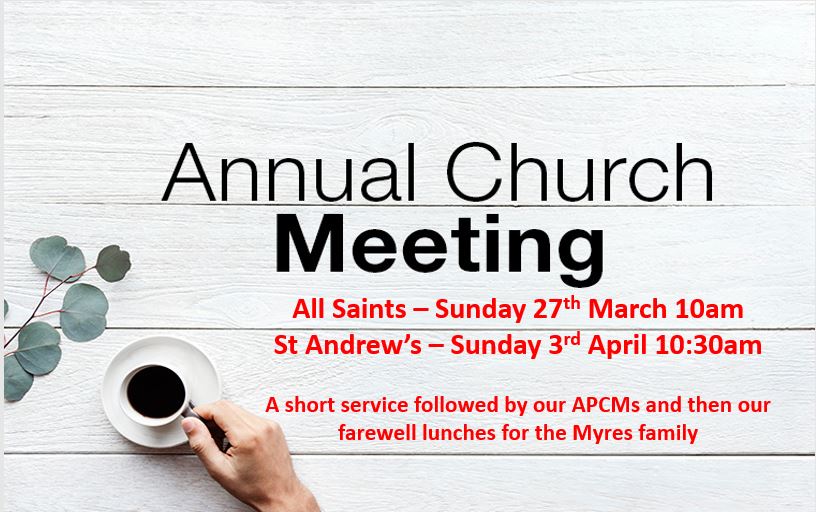 At our APCMs Dave outlined in his Rector’s Review some really important changes ahead for leadership and staffing of our churches.

You can watch his Rectors’ Review at St Andrew’s APCM here. which gives more information than below.

A summary of what he said, with diagrams of the new structurs, can be downloaded here: Oversight of new leadership structure and proposals

Over the last 6 years we have grown significantly (out total worshipping community number at St Andrew’s in particular, and the number of chidren and youth have both doubled) and we have reached the point where we need to restructure leadership and recruit new staff if we are to continue to be a growing, healthy and sustainable church living out our calling to ‘partner with God in the flourishing of our communities.’

Over the last couple of months, Dave, the 4 wardens, the two treasurers and Chris Mesley have been working closely and prayerfully, with the Diocese of Worcester to create a new leadership structure which will be robust and flexible to take us forward into the next few years as ‘St Andrew’s & All Saints’, especially in the light of our curate, Peter’s departure (we will not get a new curate for at least 18 months).

In order to implement this new structure, we are going to be creating 2 new roles:

We have had helpful discussions with the Diocese over these two new roles and are currently beginning the process of recruiting for them.

We have been in discussion with the diocese and they have been very helpful and generous in agreeing for us to reduce our total parish share by 17% or £20k per year, and offering us a ‘healthy churches grant’ of £21k per year for the next two years (with an additional £9k for years 3 and 4).

This therefore means that we now need to raise an extra £30k or £44k each year, ourselves, from sustained increased giving, to be able to recruit these roles (this is an increase of about 20% of our total voluntary giving plus gift aid across our two churches).

Would you be able to help us raise the money for these new roles?

We will be having a ‘Kingdom Giving Campaign’ in the month of April to seek to raise the necessary money for these roles, so that hopefully we can begin to advertise for these roles in May.

Details of how you can give to enable this to happen can be found here.

We believe that God is leading us in this and would be really grateful for your support in prayer (for the right people to be recruited) and fiancially.

With our love and prayer